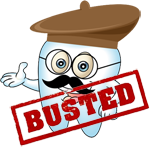 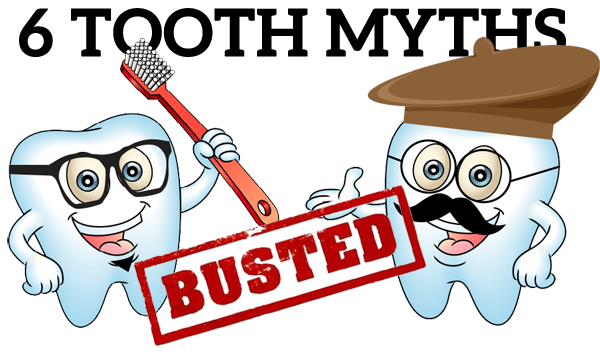 There’s a lot of misinformation about dental care. While many of the myths are harmless, believing in some of them may actually cause you to neglect or damage your teeth. It’s important to get correct information and find out what’s true and what’s false. Here are the top 6 tooth myths we love busting.

A lot of people believe that baby teeth are less important than permanent teeth because they are just going to “fall out anyway”. But baby teeth serve a very important purpose as place-holders in growing mouths during early years of development. They help maintain the proper structure of the mouth in providing a guide for permanent teeth to move in behind them when the time comes. Plus, cavities in baby teeth still cause pain and discomfort which often leads to missed school and poor overall health.

#2 You should brush immediately after eating.

You may be surprised to learn that brushing immediately after a meal may actually harm your teeth. Acids created by food can wear away your protective enamel leaving your teeth at their weakest state right after you eat. Your body uses saliva to correct the high acid levels in your mouth. Saliva also naturally washes away food particles and gives your enamel the balance it needs to continue its protective work. Even soft-bristled toothbrushes can be highly abrasive when enamel is already weakened by high acid levels. It’s best to let saliva do its job after you eat. But don’t forget to brush altogether. Simply wait at least an hour for your mouth to recover from the acid assault. And don’t forget to brush at least two times a day and for two minutes each time.

Many people assume that just because their parents had few cavities, that they will also have few cavities. Conversely, people too often use genetics as an “excuse” for poor dental care by blaming cavities on family history. While there is a small genetic influence in determining susceptibility to tooth decay, the fact remains that most cavities are 100% preventable. Babies and young children, for example, often develop cavities as a result of bacteria transferred through the sharing of eating utensils or parents cleaning off pacifiers in their own mouths.

#4 Candy is the worst food for your teeth.

It may be a shocker, but starchy foods like potato chips and crackers can actually be worse for your teeth than candy. That’s because these foods have a high sugar content and they often become stuck to your teeth. While some candies dissolve quickly in the mouth and are washed away by water or saliva, crackers often hang around in the mouth a lot longer.

#5 Chewing gum after a meal is just as good as brushing.

While chewing sugar-free gum after a meal can be better than not doing anything, it’s certainly no substitute for brushing or flossing. Gum that contains the natural sugar substitute xylitol has actually been shown to prevent tooth decay. But brushing and flossing for at least two minutes, twice a day, is the only way to truly clean your teeth and reach the tight spots between them.

#6 Brushing or flossing is bad for bleeding gums.

It’s too often assumed that when brushing or flossing causes bleeding gums, that those activities should be avoided. In fact, the opposite is true. Gums generally bleed because they become inflamed due to food particles trapped between the teeth and gums. A buildup of plaque irritates sensitive gum tissue. Brushing and flossing should always be performed gently, using a soft bristled brush. However, bleeding gums should never be considered “normal”. If you or your child has gums that bleed regularly, they should be examined.

Myths busted! For more information about taking care of our child’s teeth, visit your pediatric dentist in Katy, TX.