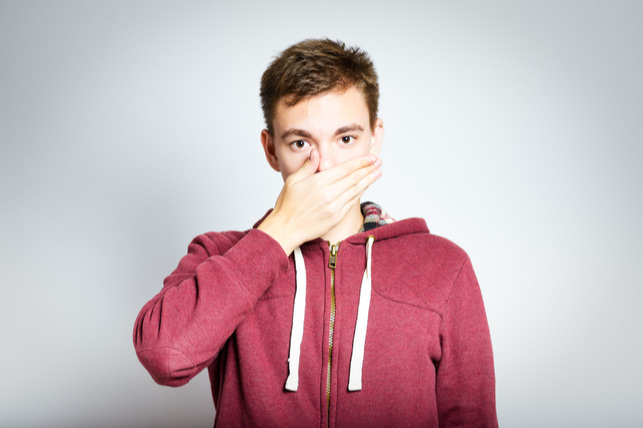 Gingivitis – Gingivitis is the mildest form of periodontal disease. Gingivitis is caused by excessive plaque build-up. If plaque is not removed by daily brushing and flossing, it produces toxins that can irritate the gum tissue, which causes gums to become red and puffy, and easily bleed. There is usually little or no discomfort associated with gingivitis, however, bleeding while brushing is quite common. Gingivitis is a non-destructive type of periodontal disease, but if the disease is left untreated, gingivitis can progress into periodontitis. This periodontitis is more severe and can eventually lead to loss of teeth.

Periodontitis – If gingivitis is left untreated, it can worsen into periodontitis, which is typically characterized by gum inflammation and recession. Periodontitis usually progresses slowly, but rapid periods of progression can occur. Periodontitis can be further broken down into various forms and degrees of seriousness. Aggressive periodontitis occurs in otherwise healthy patients, and progresses very rapidly – and sometimes without symptoms.

Chronic periodontitis is the most common form of periodontitis and is prevalent in adults. It progresses more slowly and is characterized by gum inflammation and bleeding.

Gingivitis is characterized by swollen, red gums that bleed easily. The bristles from a toothbrush can poke and rub against red and inflamed gums, causing them to bleed easily. Gingivitis can worsen into periodontal disease, which is usually marked by heavy accumulations of dental plaque and calculus. Periodontal disease and periodontitis often cause puffy, bright red gums, and heavy gum recession. It can also lead to loss of teeth. Gingivitis usually can be resolved with good oral hygiene, such as more prolonged and more frequent brushing and flossing. Even swishing around an antiseptic mouthwash in your mouth may help.

Dental plaque-induced gingival diseases are characterized as gingivitis associated with dental plaque only with or without other local contributing factors. It can be described as a bacterial infection of the gingival tissue caused by plaque (biofilm) at the gingival margin. This gingival disease can be caused by systemic factors, plaque, medications, or malnutrition. This can come with or without contributing factors if there are factors, there are a few that may apply. Orthodontic appliances, dental restorations, and crowded or malpositioned teeth are factors.

Non-plaque induced gingival lesions can be caused by a specific bacterium, virus, or fungus. It can potentially be caused by systemic conditions like allergic reactions and certain illnesses, as well as genetic factors, wounds, or reactions to foreign bodies.

Gingivitis is mostly caused by poor oral hygiene. It happens because bacteria accumulates plaque between and around the teeth. Other common causes are diabetes, use of certain medications, tobacco use, a poor diet, and genetic predisposition. However, most periodontal disease begins as simple gingivitis, which can be easily treated and prevented.

The plaque that builds up in between gums triggers an immune response, which leads to the destruction of gingival or gum tissue or loss of teeth, as previously mentioned. Dental plaque is a biofilm that accumulates naturally on the teeth. It is formed by colonizing bacteria that are attempting to stick to the smooth surface of teeth. When this plaque is not removed adequately, it can harden into tartar or calculus and builds up at the base of teeth. It is yellow and can only be removed by a dentist.

There are a few other causes and risk factors that can cause gingivitis. The first is changes in hormones; it can occur during puberty, menopause, menstrual cycle, and pregnancy. Some diseases that are linked to a high risk of gingivitis include cancer, HIV, and diabetes. The risk of gingivitis increases with age, and a poor diet is linked to gum disease. Some medications reduce saliva flow, which can then lead to abnormal growth of gum tissue and plaque. Smoking not only kills, but also those who smoke are more common to develop gingivitis compared to those that do not smoke. Lastly, family history can play a part in developing gingivitis, those whose parents have it, have a higher risk of also developing it.

Like cavities, gingivitis can be prevented by maintaining a healthy oral routine that includes brushing twice per day for two minutes at a time and flossing once per day. Eating a balanced diet and visiting the dentist regularly helps to prevent gingivitis. Flossing every day, and doing it multiple times a day will help to prevent plaque from building up. Being consistent with flossing is going to be critical. Swishing mouthwash can help to reduce plaque and can remove remaining food particles that brushing and flossing may have missed. Lastly, know your risk. As previously mentioned, age, smoking, diet, and genetics can all increase the risk of periodontal disease. If your child has a high risk of developing gingivitis, talk to their pediatric dentist about precautionary measure you can take to keep the disease from progressing.

As with most ailments, periodontal disease is best dealt with in its early stages, making early diagnosis vital for successful treatment. Only a dentist or hygienist can check for symptoms and diagnose a person who has gingivitis. Checking for these signs can be done by using an x-ray and periodontal probing. Visit your Katy pediatric dentist at Kids Healthy Teeth if your child is complaining about oral sensitivity or is displaying any of the symptoms above. We will evaluate their oral health and provide you with a treatment plan that will help earn a smile that is free of gingivitis.

Why are My Child’s Gums Bleeding? 4 Common Causes.